Eating for a Healthy Headspace There is perhaps no better time for a dietitian like myself to be having an honest conversation about the connection between nutrition and mental health.

The two most cost common mental health disorders, depression and anxiety, affect more than half a billion people globally.1

Anxiety affects around 4% of the total population across all demographics starting at age 15+, but is slightly higher in those that are over 50.2

Depression follows a similar trend, but spikes more significantly in those aged 50+ as compared to anxiety disorders. 3

The global pandemic has undeniably taken a toll on the health and happiness of people around the world and while food only represents part of the mental health picture, it’s one we certainly cannot ignore.

There is an undeniable connection between food, nutrition and human mental health and happiness.

For many of us, there are only a few things in life that might bring us more joy and anticipation than our favourite meal.

And there is so much more to it than that.

We are at a point in scientific discovery now where the connection between certain foods and nutrients and mental health outcomes like anxiety and depression is better understood than it has ever been before.

It is these discoveries, and more, that I plan to explore in today’s article.

What Does the Research Tell Us?

There are two primary bodies of research evidence in the world of nutrition and mental health. The first is the observational evidence which looks at the dietary differences between those who do and do not have depression and anxiety and tries to establish certain key foods and nutrients that are associated with an increased or reduced risk of these conditions.

The second is the experimental evidence, which looks at people who already have symptoms of depression and anxiety and evaluates whether or not dietary changes can help modify those symptoms.

Let’s take a look at what each research category has to each us about the connection between nutrition and mental health.

Perhaps unsurprisingly, there is a strong correlation between a person’s dietary pattern and their risk of depression.

In 2017 a significant review of studies from ten countries found that certain foods were either predictive of, or protective against, depression risk.4

The food components that were protective included:

*Nuzest Good Green Vitality is enriched with antioxidants from a variety of sources and can help increase the antioxidant quantity in your diet.

The food components that were predictive included:

*Nuzest Clean Lean Protein is an 100% plant-based protein product that can help improve your plant to animal based protein intake ratio.

Researchers believe that the interaction between these foods and depression risk has a great deal to do with how they interact with blood sugar levels, the immune/inflammatory systems and the gut microbiome 5

Given the increasing interest specifically around gut health and the gut-brain connection, I want to take a moment to explore it further. 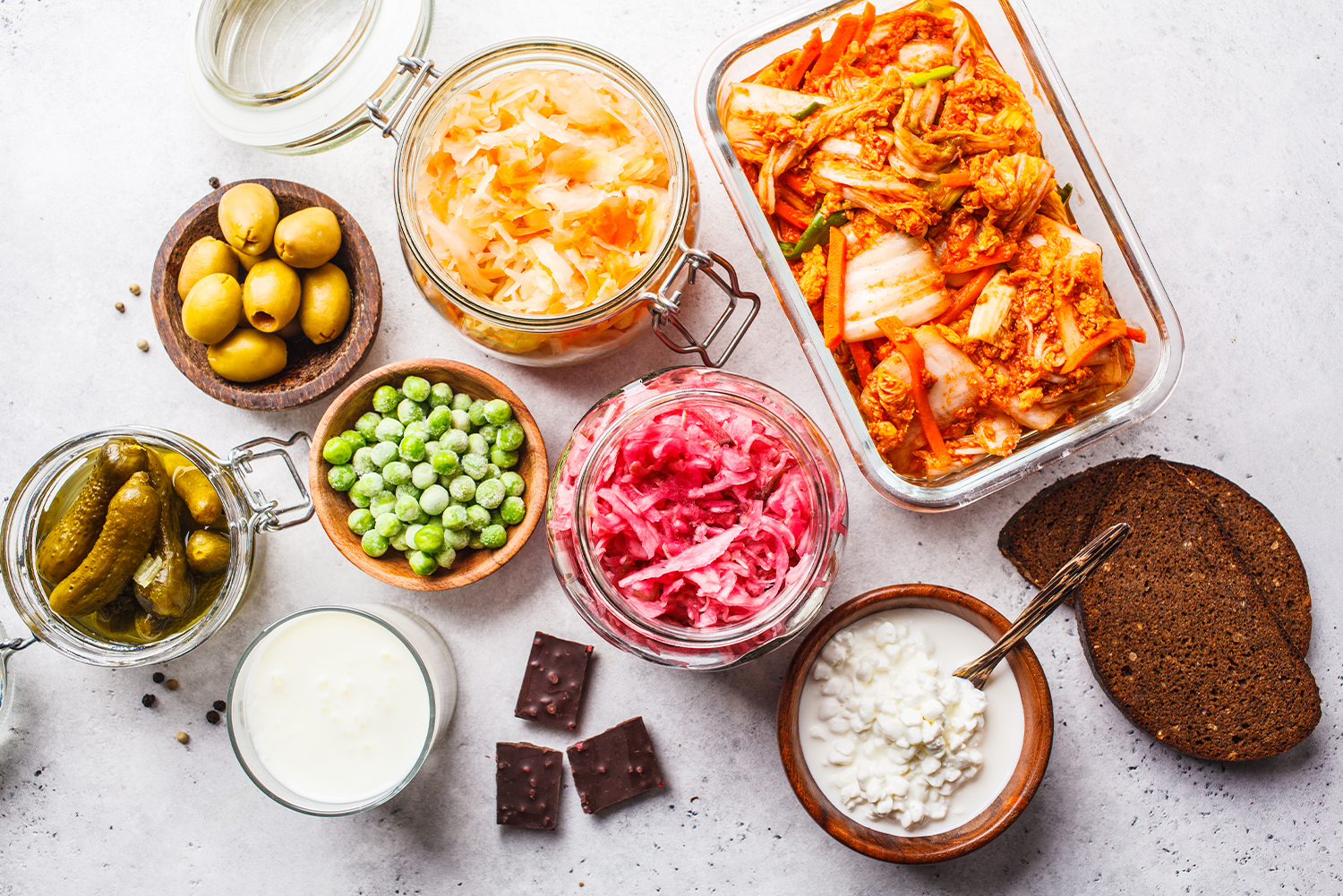 The gut-brain connection refers to the intricate chemical messaging system that takes place between the human brain and digestive tract, which we know is heavily influenced by our gut bacteria.

Naturally, this makes gut health an interesting topic in the world of mental health nutrition.

A 2019 study out of the British Medical Journal found, for example, that the use of prebiotics and probiotics may represent a useful complimentary treatment approach for both anxiety depression. 6

Although both studies admit more research will be required, the potential protective effect of probiotics  was also eluded to in a more recent 2020 systematic review published in Frontiers In Neurology.7

While both pre and probiotics are commonly consumed in supplemental form, as there are also certain widely available foods in each category that allow us to access these potential benefits from our day to day diet.

While we can’t say with certainty the inclusion of pre and probiotic containing foods or supplements will protect against or reduce the symptoms of depression, it is undoubtedly an area of great interest and putting forth some level of effort into the inclusion of these foods may represent a low risk strategy for many people to improve dietary diversity and gut health.

Now that we have a better understanding of some of the food components associated with good mental health outcomes the next big question we have to ask is whether or not an individual suffering from a mental health disorder can experience symptom reduction by improving the quality of their diet.

This question was answered in resounding fashion via a now renowned 2017 mental health study known as the SMILES Trial.

The trial evaluated the impact of working with a dietitian over a 12 week period on individuals who were living with moderate to severe depression, many of whom were undergoing some form of therapy.

It found this nutrition-focused intervention to significantly improve depression symptoms in this population and has since paved the way for further similar studies.8

Since its publication, further high quality experimental studies have emerged exploring the positive effects of dietary improvements on the improvements of people living with depression, thus confirming the massive role that nutrition intervention has to play in the world of mental health. 9, 10

And the experimental evidence does not stop there.

A massive review published in the acclaimed JAMA journal found, for example, that omega-3 supplementation has a clinically meaningful role to play in reducing anxiety symptoms. 11

The amount of omega-3 required to achieve this affect was 2000 mg daily.

Which is approximately the same amount found in:

Because the human body cannot synthesize omega-3 fatty acids, they are considered essential fatty acids which must be consumed from either food or a supplemental source.

They are also well known for their anti-inflammatory capabilities, which may further contribute to their protective effect as evidenced by studies showing that high fish intake is often associated with a lower risk of depression. 12

Given the relatively few foods that are a rich source of omega-3s, it is important to proceed accordingly to ensure dietary adequacy, especially for those looking to optimize their mental health through dietary modification.

Other Nutrients of Interest

I’d like to round off the focus on nutrition and mental health by exploring three more nutrients of interest, each of which have been implicated as potentially protective against depression 13, and all of which can be found in Nuzest’s Good Green Vitality.

Zinc – found in animal products such as seafood, dairy, meat as well as legumes, seeds and whole grains.

While we can’t say with certainty that eating more of these specific nutrients is protective against depression, the evidence suggests that they just may be.

Final Thoughts – Looking Beyond the Nutrients 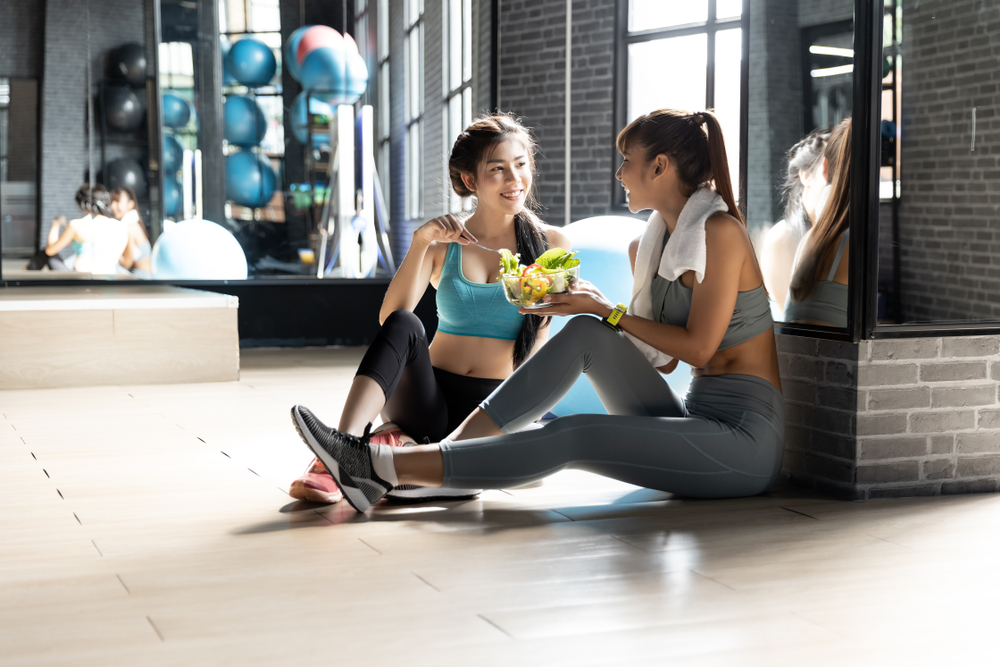 As today’s discussion draws to a close, I believe that it’s important to acknowledge that the interaction between mental health and nutrition goes well beyond the role of specific foods or nutrients.

A 2015 study out of Thailand demonstrated that those who more regularly ate meals with others, rather than alone, tended to be far happier.14

Obviously social interaction is one of the many external variables that can modify mental health status.

We also know, for example, that high levels of stress are often associated with poor digestive health outcomes due to the strong gut-brain connection that was discussed previously in this article.

This explains why the relaxation practice of meditation has been increasingly linked with improved mental and digestive health outcomes. 14

While stress management comes in different forms for different individuals, a daily meditation practice can be facilitated by a wide array of smartphone apps and online guides and has becomingly increasing acknowledged as valuable and accessible tool.

The body of research in the world of mental health is vast and while I’ve only just scratched the surface in today’s piece I do genuinely hope you will come away from today’s article with meaningful and actionable takeaways that will serve to better the state of mental health in our world. How To Optimise Brain Function And Health Back-to-school tips to keep you organised