The first 1,000 days of an infant’s life are said to be critical to their neurocognitive development (1). However, beyond these 1,000 days, lifestyle and environmental factors continue to have a huge impact on brain development, none more so than nutrition. Failure to provide adequate nutrition can lead to long-term consequences affecting behaviour, cognition and mental health (1).

With the pace of modern life and the rise of processed and convenience foods, it can be hard to ensure your child is getting all the required nutrients for brain health. Kids Good Stuff was formulated in conjunction with leading independent health experts to support all 11 body systems, including the brain and nervous system. Designed as a daily supplement, it helps fill the key nutritional gaps in the diets of children aged 4-14 and contains a variety of vitamins, minerals and plant foods that work synergistically to promote brain health. 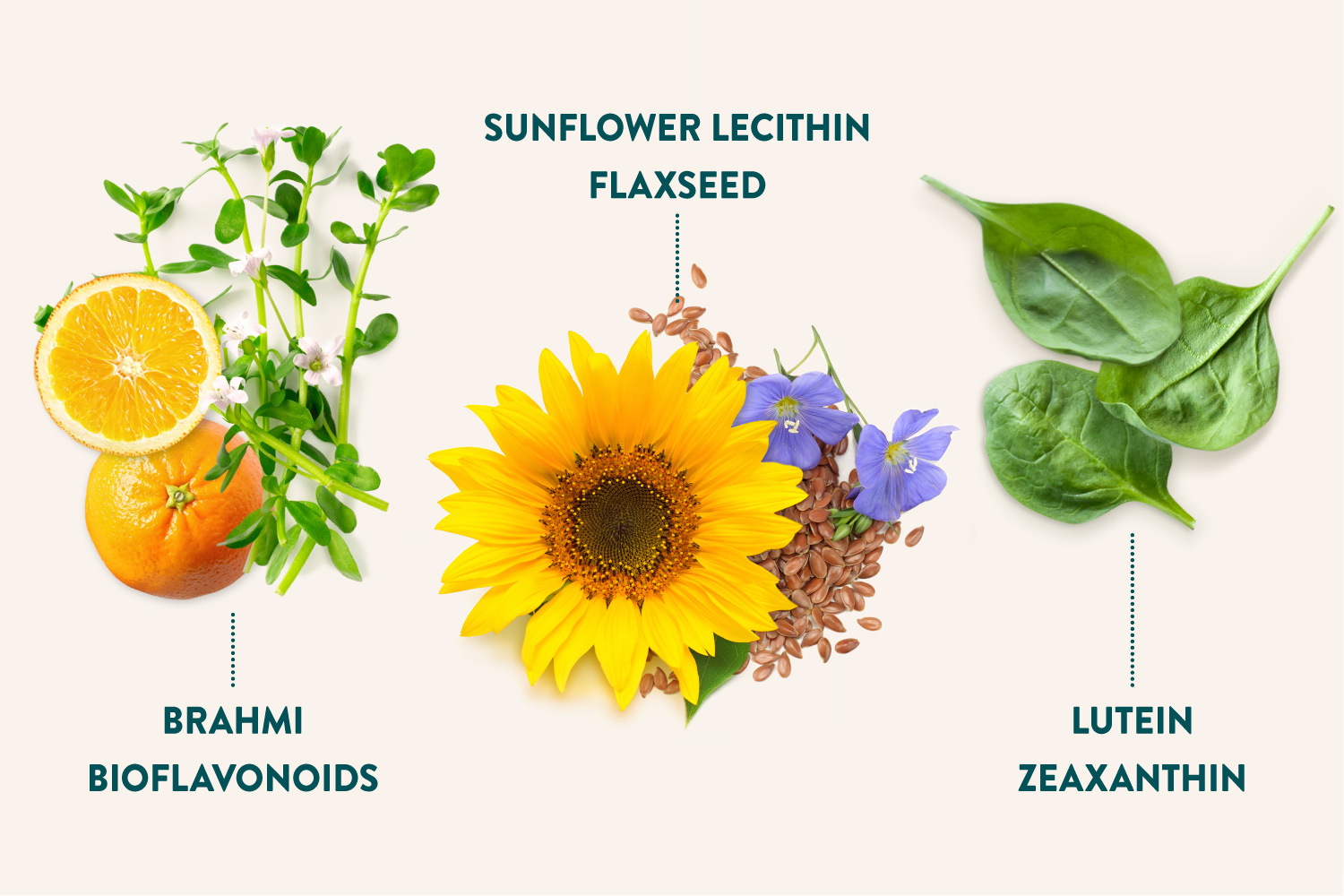 Kids Good Stuff contains 250mg flaxseed which is a valuable source of omega-3 fatty acids. Omega-3 fatty acids are made up of docosahexaenoic acid (DHA), eicosapentaenoic acid (EPA) and alpha lipoic acid (ALA) which play a critical role in brain health. EPA has been shown to modulate behaviour and mood, whilst lower levels of DHA have been associated with poorer performance in spatial and learning tasks (2). ALA in particular, has been shown to result in a higher brain mass when given to pups in studies, highlighting the value of flaxseed for brain development (2).

Lecithin contains phosphatidylserine, phosphatidylcholine, and phosphatidylinositol substances that form part of the cell-membrane. Lecithin also provides choline, a precursor of the neurotransmitter acetylcholine which acts as a key messenger between cells. Research has demonstrated the importance of lecithin for healthy brain development via its effects on synaptic development. Lecithin was shown to upregulate synapsin I (SYN1), which supports neural complexity and activity (3).

Bacopa, most commonly known as Brahmi is a perennial herb native to India, Australia, Europe, Africa, Asia, and the Americas. It is traditionally used in Ayurvedic medicine as a natural cognitive and memory enhancer. Recent studies have highlighted the benefits of Brahmi for children with hyperactivity and attention challenges (4). Brahmi was found to be effective in reducing hyperactivity and improving cognition by acting as a free-radical scavenger and antioxidant, promoting neuroprotection, increasing choline, reducing β-amyloid, increasing cerebral blood flow, improving mitochondrial efficiency, and modulating neurotransmitters such as acetylcholine, serotonin, and dopamine (5,6). Kids Good Stuff contains 50mg of Brahmi which is considered a safe dose for children.

Lutein and zeaxanthin are classified as xanthophyll’s and are part of the carotenoid group. Extracted from the marigold flower, lutein and zeaxanthin play an important role in eye, brain and nervous system development, particularly during the early stages of life (7). In the same way lutein protects the retina from damage, via antioxidant and anti-inflammatory actions, lutein also protects the brain (8). Lutein spans the membrane and works to block the oxidation of lipids such as DHA which is necessary for membrane structure and fluidity in the brain (8). Zeaxanthin also functions as an antioxidant, exerting macular and neuroprotective effects (9). Supplementation with both zeaxanthin and lutein has shown to improve central nervous system xanthophyll levels and cognitive function in young adults and are therefore vital nutrients for brain development (9).

Flavonoids are polyphenolic compounds that are naturally found in many plant-based foods such as citrus, tea, berries and chocolate (12). Bioflavonoids are associated with improved cognition, eye health and reduced inflammation and oxidation (10, 11). Specifically, bioflavonoids in the form of blackcurrant have been shown to improve brain health via inhibiting monoamine oxidase (MAO) (12). Higher levels of MAO are correlated with lower dopamine and therefore lower working memory and attention (12). Cocoa has been shown to improve the focusing ability of the eyes of young adults and has also demonstrated positive benefits for cognition (12). Citrus bioflavonoids are associated with improved attention and general executive function (12). As bioflavonoids all have slightly different actions, Kids Good Stuff has been formulated to include a spectrum of flavonoid compounds including blackcurrant, cocoa and citrus, to ensure optimal support. The evidence also suggests that taking bioflavonoids derived from wholefoods is superior to taking isolated flavonoids, which is why Kids Good Stuff contains 11 real fruits and vegetables.  Nutrition plays a crucial role in promoting brain health for children. Kids Good Stuff is an all-in-one formula that provides the key vitamins and minerals to promote optimal health, including brain health. To find out more about the benefits of Kids Good Stuff, click here.

Kids Good Stuff is a great way to help your kids get all the nutrients they need to keep them happy and healthy from the inside out. 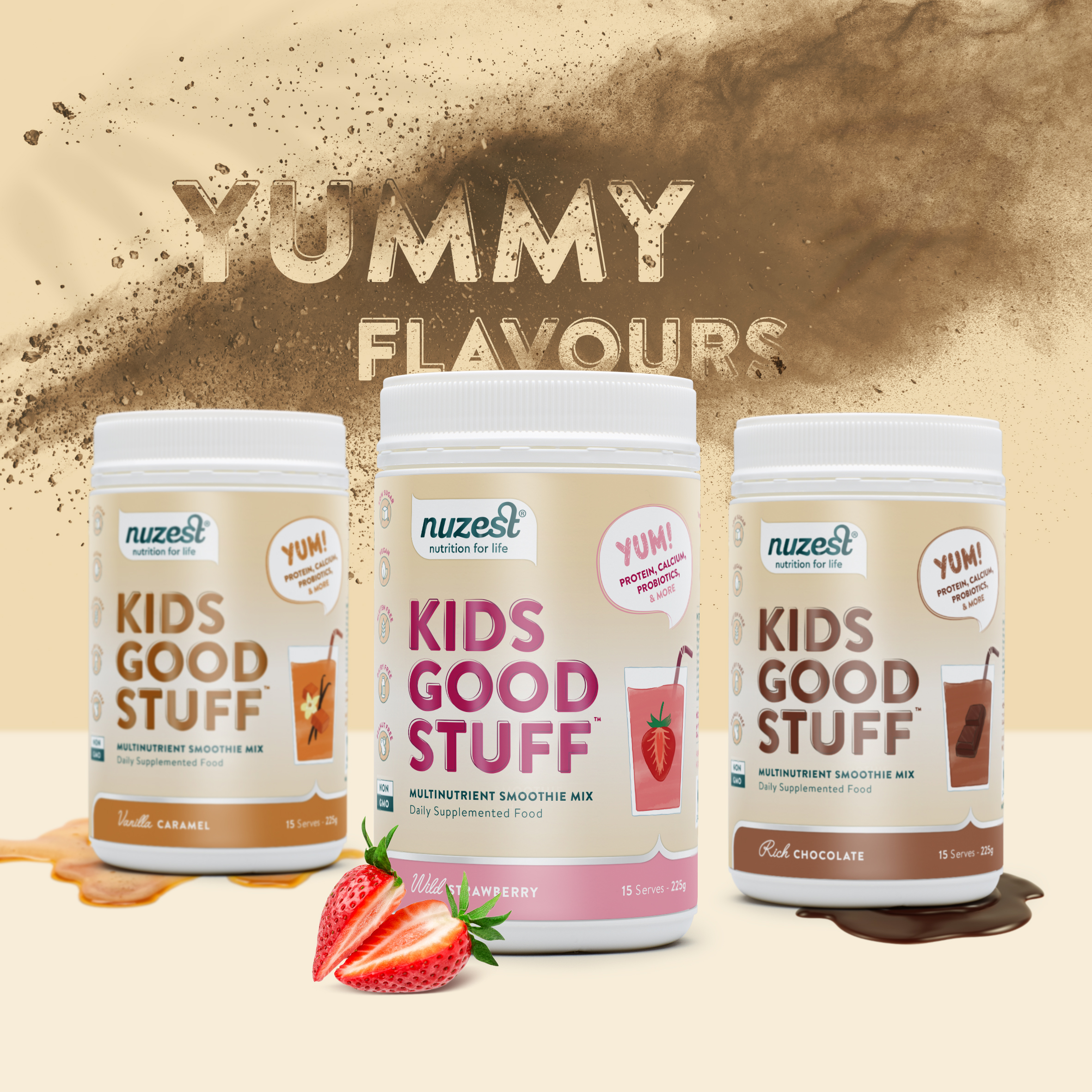